I am Minded to Rise - New Helion Title 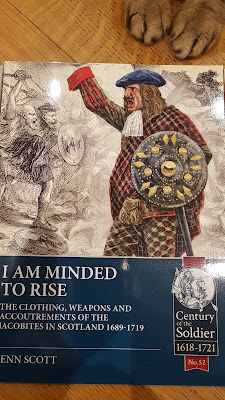 This was a most unexpected little gem from Helion as part of the Century of the a Soldier  series. Certainly a niche subject but brought to life by the author. The book covers the Jacobite uprisings from 1689 through to 1719. It provides a valuable insight into the wide variety of clothing, whether ‘traditional’ highland dress or not, the textiles used, weapons used by the different Jacobite armies and the range of classes within each army over this period. It even covers hairstyles. There are some super colour plates of troops and flags of the Jacobite armies and the book is also well served with some black and white photographs and contemporary illustrations. Overall it is clearly written in a lively and entertaining way, and is very well researched  if the bibliography is anything to go by. I don’t wargame any of the Jacobite wars, and probably never would unless someone made tartan paint, and if the clock was turned back despite the definite romance and ultimate futility of the Jacobite cause, would no doubt have been a Government supporter given my late mum’s family background as generation after generation of bible-thumping Presbyterian Lowland Scots (There’ll be nae work on the Sabbath, but ye ken still steal cattle from the English!)
By Colin Ashton - April 04, 2020