In Deo Veritas - Captain General Supplement for the Great Northern War and War of the Spanish Succession. 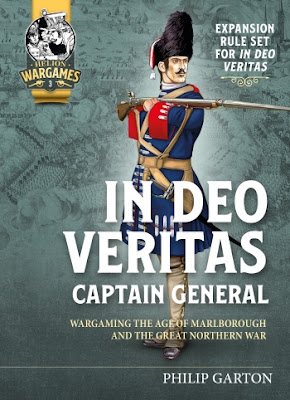 This is the first in a number of planned supplements for the ‘In Deo Veritas’ 17thC rules published by Helion last year. ‘Captain General’ covers the period covering the Great Northern War and the War of the Spanish Succession. You need a copy of the main rule book to get started. I’ve been fortunate enough to play a couple of games using In Deo Veritas last year using Skype with several of my gaming friends so am familiar with the rules themselves. ‘Captain General’ is a glossy well presented booklet, full of suitable eye candy. To be honest, much of  the book is taken up with four interesting scenarios of battles of the era, each with orders of battle, maps and so forth. What is good is that they are all of less well known, smaller battles that have been adapted to allow for a game that can be played in a ‘typical’ club evening (or could be were it not for the lockdown restrictions). The remainder of the book explains in step by step detail the period specific changes to the body of the original rules, which is very useful. To be honest there are no major amendments, so if you’ve used the main rules this supplement will hold no mysteries for you. Overall verdict is positive. It’s a nicely put together booklet, useful for its scenarios alone, although a couple more would have been even better.