A few more figures made it off the painting desk this week. First of all there were three limbers and teams for the British 1812 army. Years ago Warlord had a ‘reinforcements’ sale so I bought several six-horse limber teams. Six horses is too many in my view (from a practical game perspective it’s a very big footprint on the table) so I used the six pairs of horses in two boxes to make up three four-horse teams. I had a spare British limber to complete the last team and just need to sort a couple of limber riders. The Royal Corps of Drivers, and indeed the Canadian Corps of Drivers, wore plain uniforms with a tarleton helmet and look very striking. 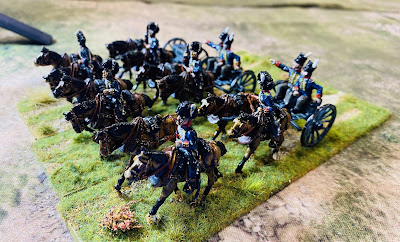 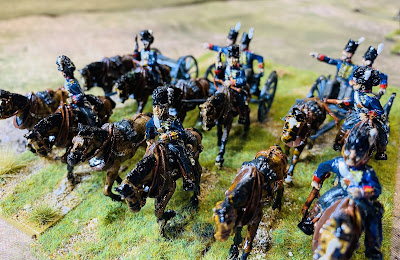 A while ago, after thinking what I could do with several spare Perry plastic Hussars and Light Dragoons I determined to knock up a few extra ‘units’ of cavalry for the War of 1812 (the first, the Baltimore Hussars and the 7th New York cavalry can be seen in an earlier post). By ‘units’ of course I apply this very loosely and largely mean the numerous volunteer and militia very small cavalry troops in the American army, and also the tiny Canadian Provincial light dragoon units. Two figures for each would suffice, so here are this week’s offerings. 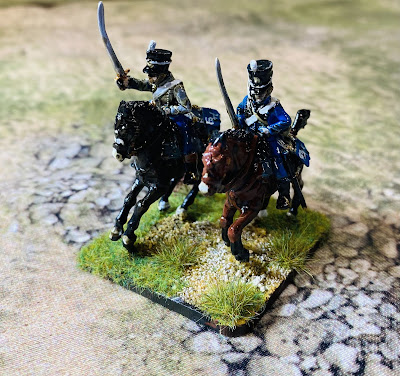 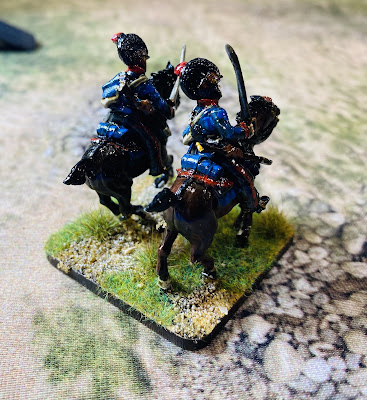 In a game they’re all pretty but pretty useless. Depending on the rules they could perhaps qualify as giving support, maybe? Even at a 1:20 or 1:15 figure ratio they don’t get more than two figures each, give or take.

A couple more US Militia cavalry troops still to finish. A welcome diversion at the moment. I should be able to post the completed articles by the end of the week, by which time I shall have sorted out my lighting.