The Battle of Lake Misnomer and the Milling Tavern, War of 1812 fictional scenario.

Hosted /facilitated a great game today. No technical issues, no errant microphones, less dragging of bodies around out of camera shot (that’s what is sounds like) and an enthusiastic group of players, (and my back held out until just after lunch) all contributed to five hours of fun. What can be seen on the table is pretty much all my War of 1812 collection. Three or is it four more battalions, a unit of Kentucky mounted riflemen and some 20 or so odds and ends and it’ll be done. How often have I said that?

Anyway....It was to be a simple encounter battle with the objective of each side denying the other the ground around the shore of Lake Misnomer and Milling Tavern where several key strategic roads, tracks and rivers met. Neil (CinC), Paul and Conrad played the British and Canadian forces entering from the left,  while John (CinC), Richard and Mark were Mr Maddison’s boys, arriving from the right. As usual we used Black Powder II with our normal house rules. 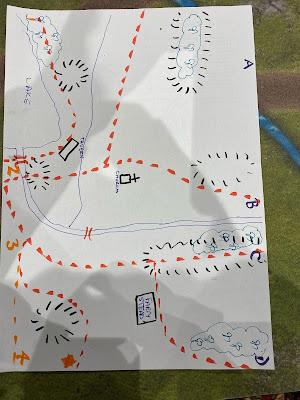 
We called it a day then. Both of Paul's brigades in the centre were broken while those on the flanks under Conrad and Neil were relatively unscathed. The Americans had taken heavy casualties but across all four of their brigades so the effect was less critical. It was probably fair to assume that the British would withdraw while the Americans licked their wounds.

It was a great game with a good result. The technology worked perfectly so everyone had access to the viewpoint of three different cameras that were live-streaming while we chatted and gave orders over Skype. There's a fair bit of technology involved in setting a game up like this, and it took a while for the glitches and mistakes to be overcome or worked round. I can't lay any claim to making that happen as its all down to my wife, from an idea from mate Steve in Newark. Black Powder work well for these 'distant wargaming' events as love them or hate them they are simple and as umpire and figure-mover they allow for a fast moving game without killing me off!

I'm going to finish off the last few units for this collection as quickly as I can as I want to get on with the Late Romans, but I shall be packing the troops away in the coming week ready for something different in a week or two. Not anything new but a change of period.