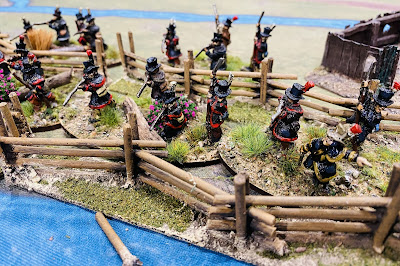 These chaps struggled off the painting station last night. Old Glory Kentucky Mounted Riflemen skirmishing. Can’t put my finger on it but I didn’t enjoy painting these so they took over a week from start to finish.  I shall field them as two units. This regiment made a mounted charge against elements of HM 41st Foot at the Battle of The Thames (or Moraviantown) in 1812. The British were overwhelmed. I’m sure the outcome would be very difficult to repeat on the tabletop.

I have a bag of mounted Kentuckians in the pipeline so with the addition of a couple of spares will be able to put together two units of six figures. I’ve also got two units of Militia in hunting shirts. One will be normal Kentucky militia, the other I think will be Maryland or Virginia (whoever fought in the Chesapeake campaign but need to check which, not that there’s any significant difference in what they’re wearing).

I took part in Skype game this afternoon run by Conrad. US-Mexican War 1846-48 in 15mm. I sold the troops to Conrad 31 (or more) years ago in order to fund a new washing machine, and it was the first time I’ve seen them since that fateful day.