And yet more new stuff

The basing frenzy continues unabated and I have now completed four more British battalions for my
French Revolutionary Wars project. These are mostly Reiver Castings with a few Trent Miniatures thrown into the mix. I've fielded the battalions with their flank companies but these would almost certainly have been stripped out to form elite battalions, not necessarily in the same theatre of operations. I can't recall which regiment it was but the main body fought in Holland and the flank companies were sent to the West Indies!

The battalions portrayed are firstly, the 1st Footguards, to complete my two small Guards Brigades which were in the thick of it for the entire Helder campaign. I've just noticed the guardsman to the left of the drummer has tripped up on something and bounced into the man on HIS left! 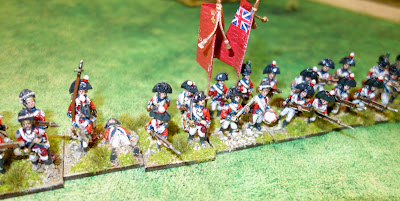 Next are the 35th Foot and the 1st and 2nd Battalions of the 5th Foot, also for the Helder campaign. Unusually for the British army the massive influx of Militia volunteering for overseas service resulted in several regiments forming a second, or in the case of a few others such as the 4th Foot, a third battalion, which served together in this campaign! Obviously the quality of these battalions, with so many ex-Militia, so little experience and training, and with fewer than than required complement of officers, was not up to scratch. Nevertheless they didn't disgrace themselves too badly, these battalions forming the 8th Brigade under Major General HRH Prince William. I still need to paint HRH himself and a RA section for the brigade. 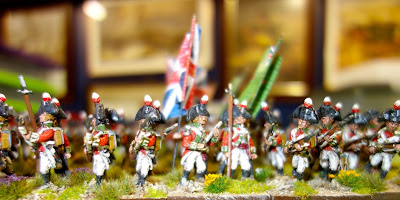 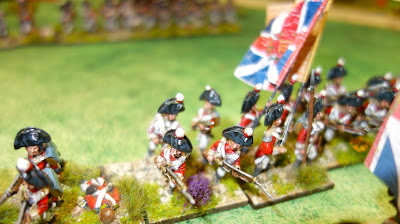 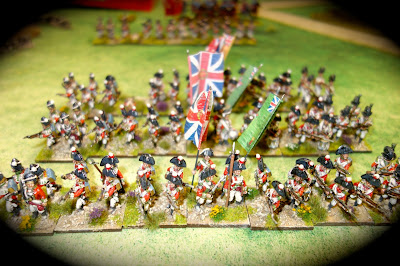 Of course, these units can also be used for the Flanders campaign during the War of the First Coalition as well as the War of the Second Coalition. Not Egypt though. Phew!

Looking ahead, its Claymore on Saturday, when among other things I shall be picking up some more painted figures off Rob of Northumbrian Painting Services and a few cavalry off Grubby Tanks. Both highly recommended and excellent value for money. I still do paint but I like to get projects 'finished' and table-ready asap and with my ailments marathon painting sessions and production lines are a thing of the past.
By Colin Ashton - August 01, 2017