This is frustrating. Actually no. It’s going exactly as planned. The campaign has reached 6 a.m. on 3 September 1793 and we have what could develop into quite a battle as the ‘day’ progresses. I can't say much if I am to maintain the secrecy element of the campaign but that will probably all go out of the window as we get more action. Suffice to say it should make for a few good blog posts when the time is right.  So on Saturday the battle, or possibly the first phase, will be played here at The Burrow. I am limiting the players to those actually involved in the engagement and as nobody knows who is playing who in the campaign it should make for an interesting cup of coffee before the game starts! Given that the various elements of the French army are quite dispersed and that the Anglo-Hanoverians, Austrians, Emigres, Dutch and Prussians are similarly spread around the Austrian Netherlands it’ll keep folks guessing and/or the dark as they would have been back in 1793. 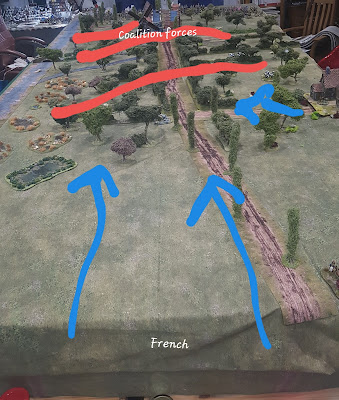 Here is the table set up for tomorrow.  North is to the left. The water feature running the length of the table is a canal crossable only by the single bridge or a bridging train. The marshy area are a major obstacle while area covered by hedges and trees is passable with some reduction in movement.  The main town isn't especially defensible but is protected by some hastily prepared earthworks. All the ground below the level of the raised roadways is prone to flooding so we might have some random instances of getting bogged down!

Anyway, that's it till after the game.