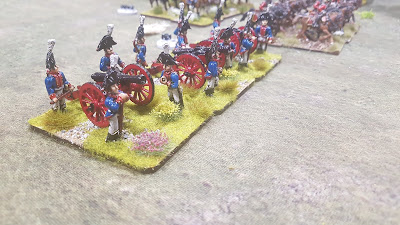 I've had these half done for weeks but finally completed them this evening. They represent Hanoverian Horse Artillery from the French Revolutionary Wars.  Hanover was early to introduce horse artillery into their army compared to most nations and I assume at least a company would have been with the army in Flanders in 1793-95.

The style of the uniform isn't correct but as I said, they represent the Horse Artillery in my army so I don't care as the uniform is very colourful and cool, and who can tell from two feet away? I'm quite pleased with them and they've quickly been exchanged with the Prussian models that were doing service as Hanoverians in my current game. They had a quick change behind the caisons maybe?

I've completed another three turns of my play by email/solo game today, 6, 7 and 8, and things are hotting up nicely, but I'm too tired to write it up tonight so assuming you're interested you will have to wait.
By Colin Ashton - March 31, 2020