The Hanoverian army of the 1790s boasted one light infantry regiment on its strength, the 14th.  That being the case I decided I just had to field the unit for the current Flanders campaign I’m running, and why not? The nearest I could find to a suitable figure (long coat tails, Corsican hat, etc) were the Victrix Austrian Napoleonic Landwehr, and as luck would have it I had a box under the table doing nothing. 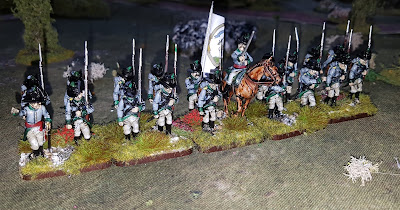 The uniform is quite straightforward and looks rather nice I think. Most of the unit were armed with muskets (another reason why the Landwehr set work) but two companies, dressed in green rather than grey, were armed with rifles. I already have these so now they have a parent unit. I decided to start with the regiment in close order, especially as the Victrix figures don’t really lend themselves to depicting skirmishers. I’ve also given them a flag although they didn’t carry one. This one is for the 14th Regiment dated 1786, before they became light infantry. I think it looks ok and not out of place. I’m in the middle of putting together enough figures to make four bases of skirmishers using a mix of  pieces from the my collection of unused plastic Perry and Victrix Napoleonics. I expect to get these completed by the end of the week and based up over the weekend. I’m not a great fan of 28mm plastics but from a cost and quality point of view you can’t really knock them. I just keep remembering the months of my life I will never get back sticking together several different armies of Warhammer Fantasy figures back in the dim and sadly not too distant past.

Anyway, more coffee is required so I shall go and then get back to supervising the rearranging of furniture in the Burrow in order to accommodate another set of shelves for the ever growing library.