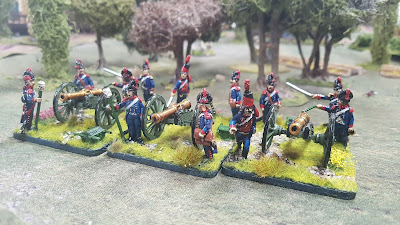 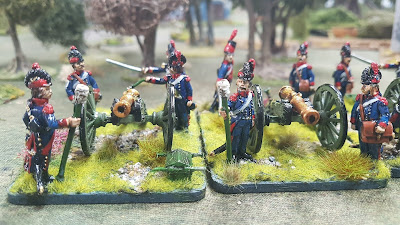 Another unit completed today, a company of French Horse Artillery wearing (with a couple of exceptions) a tarleton helmet and long tailed coats. They look a bit smart even if I say so myself. The figures are Eureka collected at Salute 2019.

Of course my French don't really.need any more horse artillery but at least they now have them in several different modes.of dress and headgear. I think I've settled.on three gun models per company for horse artillery and four for foot artillery, but I guess it depends upon the scenario.

Back to the painting desk now to carry on chipping away at the lead mountain and the drawer of doom. But as they say, one can eat an elephant but do it in small bites, unless there's been a run of elephants in the shops and there are none left!