So, following on from the previous post, in ‘Campaign Time’ the game today commenced at 9.30 in the morning on 3 September 1793. Only those Campaign players directly involved in the battle had been invited to The Burrow; as I’ve said before I need to at least try and keep the anonymity of the players secret for as long as possible, which everyone seems happy about. That being the case I will not be naming the players and any photos in which they appear will have been suitably edited. Of course if I wanted to keep everything under wraps there wouldn’t be much of a blog post, so that bit of the secrecy has been ditched. It won’t matter so far as the campaign goes.

Feld-Marshal-Leutnant Von Freytag deployed his Hanoverian and Hessian infantry around Hondschoote. The cavalry brigade was held in reserve. I decided that due to the closed nature of the terrain the Hanoverians and Hessians could deploy using the ‘Fog of War’ rules and large pink cards were used to mark the locations (or not if they were blanks) of their units. A couple of Freytag’s units were already carrying casualties, received during the skirmishing earlier that morning as they withdrew from their outposts at Warum, but none critically.

General de Division Jourdan ordered his forces boldly down the main road, the brigade of General Colaud taking  the lead while the other brigade of infantry under d'Hédouville pushed on through the massed hedgerows between the road and the marsh. The artillery and cavalry supported the right of the main push. This was not good cavalry terrain. In a way this factor favoured the French as their cavalry were outnumbered and outclassed by their Hanoverian counterparts.

In time honoured style I will let the photos take you through the key stages of the battle. Suffice to say it did not go at all as I had expected and has posed me some interesting issues to resolve before we move on to the next day or sets of orders and stuff.  As is now usual we used General d’Armee, and the 28mm figures and terrain are all mine. Each turn represented half an hour of ‘Campaign Time’. 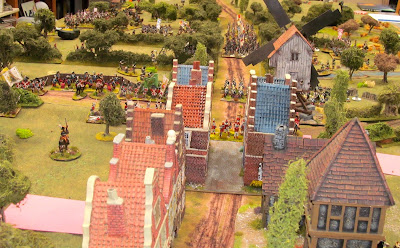 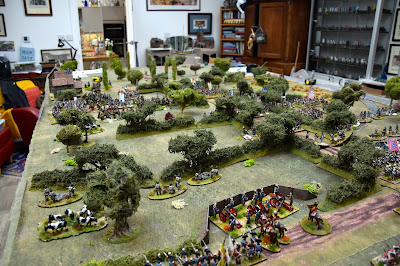 By now the French were exhausted. Two attacks down the road had been bloodily repulsed and two battalions were close to breaking. The other infantry brigade had recovered after failing their 'faltering' test but with losses mounting among his artillery (mainly fatigue casualties thanks to some dire dice rolls) Jourdan ordered a retreat, covered by his cavalry. It was 4pm Campaign time, and we'd played 14 turns.

The Hanoverians and Hessians  defended the town with relative ease as the French were dogged by bad luck from the start. Nothing worked for the French. But, it was a fun little battle and the outcome will certainly provide me with some interesting problems to throw at both sides. I had my fun during the game by sending both players a few emails from messengers arriving with news from elsewhere in the vicinity, namely around Dunkirk and Bergues. While the battle had been raging the Dunkirk garrison had sortied out to distract the Anglo-Hanoverians, and York had ordered troops south along the causeways over the marsh to try and cut off the attack on Hondschoote from Bergues, but these were driven back.

I shall now send a flurry of messages to the players as we start day 4 of the campaign.
By Colin Ashton - March 08, 2020