The first offering this week is some more cavalry for my Anglo-Hanoverians  in Flanders in the shape of the 2nd Dragoons aka The Scots Greys. According to the only source I've found, the Osprey book, the Greys didn't wear grenadier caps in the 1790s, having dispensed with them 10 or more years previously,  and would t readopt them until 1807. I also reckon they'd keep them for parades and wear bicornes even if they were supposed to wear them. The figures are from Trent and are not bad bit would benefit from a command pack. 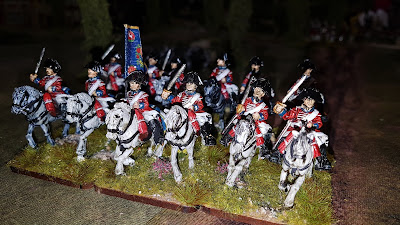 Next a commander for my Emigres, this one dressed in the snazzy uniform of the Mirabeau Legion. Just an old Elite Minis General with a head swap. He will do. 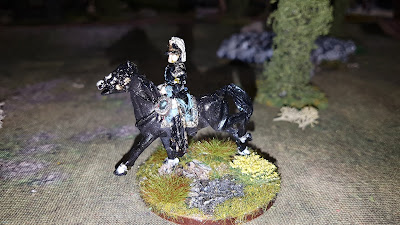 If I'm to be household for the next 1,000,000 years I hope I can a) get through some of the lead mountain and b) evolve into an Eloi rather than a Morloch. Someone's selling bog roll down the pub at £50 a roll so better go before curfew.
By Colin Ashton - March 17, 2020