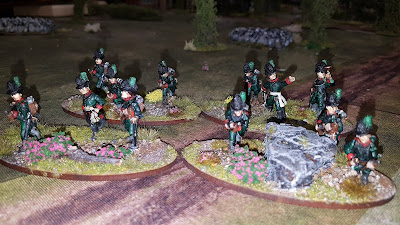 A couple more additions for the Flanders Campaign. Above we have Hompesch’s Chasseurs who reportedly were a fine fighting unit and served throughout the campaign and the withdrawal into Hanover. The Hompesch is the same Hompesch who were know for the Hompesch Mounted Chasseurs that fought in Egypt. These are some Perry Austrian jäger with new heads in the crested round hat style. They are armed with rifles. 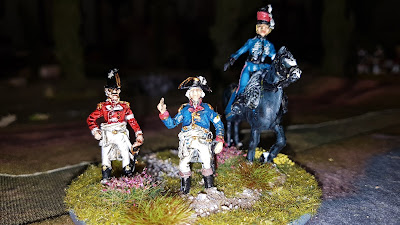 This is a new command stand for my Emigre forces, depicting the Conde himself, accompanied by a staff officer and a mounted young lady in the uniform of the Bercheny hussars who might or might not be Mrs Conde. These are all Stadden figures from the bottom of my box of doom. 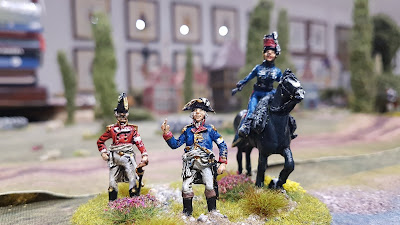 That’s it for now. Almost done is a battalion of the Hanoverian 14th (Light) infantry, but in close order. I will then do the same battalion in skirmish order to join the two rifle companies of this regiment that I already have.
By Colin Ashton - March 17, 2020