Back to the French Revolutionary Wars War campaign

The FRW campaign has still been moving on in the background over the past few weeks and it is now dawn on 14 September 1793.  Some of what follows is going to be news to both sides but a little 'soft' intelligence will do no harm.

The Austrians find themselves shut inside the city of Courtrai. Their commander the Prinz Von Saxe-Coberg-Saalfeld (Conrad) had plans for a breakout urged on by his Chief of Staff Colonel Mack ( some irony there) and endured several days under siege as after the French crushing victory almost a week earlier Houchard had manoeuvred the almost the entire Armee du Nord to surround the city. Siege operations were commenced against the city on the right bank of the Lys, with a bridge of boats (two bridges actually as they put to use the captured Austrian one as well) connecting each side of the river. On the left bank the French sought only to blockade the city as resources did not permit entrenchment to be prepared there as well on the right bank. They had to make do with two artillery redoubts  and a few unconnected and incomplete entrenchments and wolf pits. 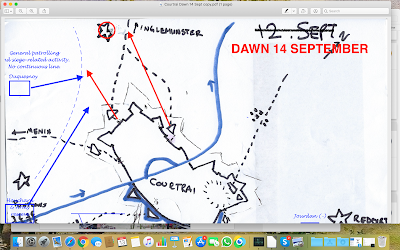 It was long suspected that a Prussian force had moved into the area of operations around  Tournai/Conde and cavalry patrols had reported contact with a Prussian cavalry brigade two days prior to this battle on 12 September.  Almost half the army, under Pichegru and accompanied by Jourdan, marched South to intercept the expected Prussian relief column coming from Tournai. Houchard, Souham and Duquesnoy remained, and a new battery established in an undemolished suburb some 300 yards South of the city was ready to begin firing. This move coincided with the date of the Austrian attempted breakout. This was pure chance and I had to smile at the way things were playing out, as the Austrians were stronger against the French on either side of the river but not both and therefore might have a chance to do the French some damage, and escape the siege of course.

Before dawn on 14 September the Austrians moved out of the city towards the Inglemunster road on the left bank of the river. French sentries were very alert and reported the danger but underestimated the size of the force attacking them. So, an hour after departing the Austrians, had against orders, secured the redoubt covering the road to Inglemunster and driven off the pickets. The French division  on that side of the river under Gen Duquesnoy was by now however on full alert and had ‘stood too’ very quickly, so at 5.30am was ready to counterattack. 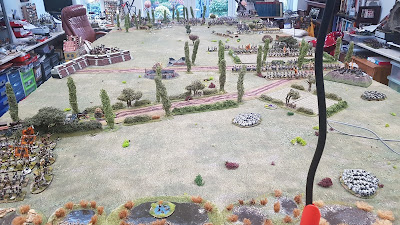 The Austrians would have complete superiority in cavalry and artillery but the infantry were more evenly matched in numbers if not quality. Many units were carrying casualties from earlier battles and had been unable so far to recoup many of these losses other than the drastic means of  merging two-battalion regiments into a single battalion and stripping out troops to rebuild the shattered grenadiers. This was also true for the French as well of course.

The Austrians forgot to order their 6th Infantry Brigade to join the breakout so their entry would be much delayed. Likewise, much of the Austrian cavalry had not withdrawn into Courtrai but escaped in the direction of Inglemunster and Rosellaere, so this oversight meant that messages ordering them to support the breakout were only sent at 5.30am.

Next time, the battle.