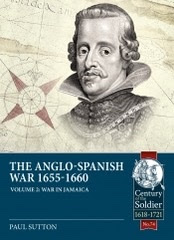 It doesn’t seem that long ago that I was writing a review of volume 1 on this subject. The Anglo-Spanish War 1655-1660, Volume 2: War in Jamaica picks up where the first volume left off with the English occupation of Jamaica after their bungled attempt on Hispaniola and takes us through the next five years of conflict on the island, the rest of the Caribbean and indeed the world, concluding with the Restoration and transition of Jamaica into a Crown colony.

This is No. 74 in Helion’s seemingly never-ending production line of excellent books in the Century of the Soldier series, and it is every bit as good as volume 1, and at over 300 pages is BIG, but reading it was an education and a pleasure. Apart from the vague notion that the English took the island off the Spanish and that Errol Flynn in his persona of Captain Blood may well have been knocking around at the time the detail of how we (the people of Britain) expanded our colonial ‘empire’ in the West Indies in the mid-seventeenth century by means other than simply working towards some ultimate ‘Grand Design’ (beyond Cromwell’s vision of rampaging across the Caribbean taking Spanish territories at will),which is essentially how it all panned out.

Anyway, the book is divided into two main parts plus three appendices. Part 1 covers the campaign in Jamaica, split into chapters on the campaigns of 1655-56, 1657-58 and 1658-1660. Despite suffering appalling losses from disease the British were well led and regularly reinforced, whereas the Spanish were rent by divisions among their commanders and were surprisingly badly supported by their other Caribbean or American colonies or their homeland. The account of the campaigns is well written, easy to follow and packed full of fascinating detail, with admirals and generals I have largely never heard of, all supported by new and contemporary maps and, my favourite bits as ever, contemporary quotes liberally dotted throughout the text which always add a little ‘something’ to the narrative. The book contains eight colour plates, each of contemporary maps of the island which I found fascinating.

Part 2 contains chapters on the Jamaica garrison, maritime affairs, and Jamaica as a colony. As with part 1 these chapters are full of detail, and the problems of maintains garrison (that is, trying to keep ahead of the horrendous mortality rate of soldiers based in Jamaica), naval operations, whether official or conducted by privateers, against the Spanish and the trials and tribulations of maintaining the colony through increased trade, sugar cane production, religion, an interesting section on the effects of alcohol, and trying to encourage more settlers, throughout the entire period.

Finally we get three appendices. The first provides us with a complete order of battle for the naval and land forces in the summer of 1655, the second covers the island of Tortuga and a glimpse into the lives and operations of the privateers and pirates, and the last on the English occupation of the Cayman Islands.

Overall then, this is an excellent, well researched (using a vast array of primary and secondary sources) companion to volume 1, and does a great job shedding light on a campaign not often the subject of such in depth research.