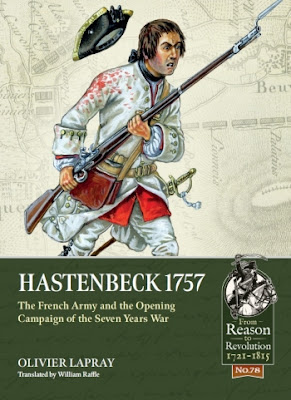 Hastenbeck 1757 is No.78 in Helion’s From Reason to Revolution series. Written by Olivier Lapray and translated by William Raffle it is an analysis of the French army and the opening campaign in the Western theatre of the Seven Years War.
In the east, Frederick of Prussia’s run of victories since Lobositz in October 1756 has only just been halted by his defeat at Prague the previous month. The battle of Hastenbeck on 26 July 1757 in Westphalia was a resounding French victory that almost knocked Hannover out of the war. This book focuses on the French army during this campaign, and does so in some detail. A short but useful introduction to the structure of the French army, it’s tactics and it’s shortcomings is closed by the sentence ‘Ultimately one could reasonably say that Marechal d’Estrees was….at the head of a large army but one that was not suited to pursue the war with energy’. Very true as there was much internal conflict between the army and the court/government that certainly muddied the waters operationally. The course of the campaign is described in detail, leading up to a fascinating account of the battle itself, which was a complex affair. There book contains a wealth of extracts from contemporary documents, which as ever bring the narrative to life, especially those referring to the battle itself.
The book is illustrated with some excellent black and white uniform prints and the centre pages contain a collection of colour illustrations, including several sumptuous originals by Patrice Courcelle. The narrative is also supported by a number of useful theatre maps as well as two of the battle itself showing the disposition of the troops involved.
No less than eight appendices complete the book, which include detailed information on the orders of battle of the French Armee du Bas Rhin at the start of the campaign and at the battle itself, unit strengths, losses, and the composition of the massively outnumbered Allied army of Observation under the Duke of Cumberland.
The French perspective was always going to be of great interest and this book does not disappoint. Well structured, it is a well-presented and detailed analysis of the battle and certainly a book that anyone interested in the Seven Years War should find useful.
By Colin Ashton - November 17, 2021