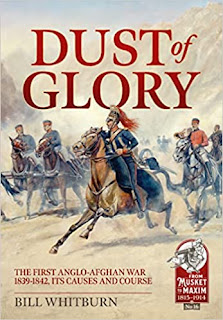 I seem to be getting through quite a few reviews these days, but in these days of too infrequent wargames and my painting mojo going up and down like the proverbial fiddler’s elbow I hope they fill the gaps between game reports and similar well enough.
I thought Bill Whitburn’s previous book ‘Bright Eyes of Danger’ about the Anglo-Sikh Wars was excellent so when his latest book appeared on my radar I had to get it. Helion have done it again with another masterpiece’Dust of Glory, the First Anglo-Afghan War 1839-42, it’s Causes and Course’, the latest in their From Maxim to Musket series.

First impressions? Superb. The original cover illustration of Shah Sujah’s horse artillery is splendid and full of action, and drew me in at once. The whole sorry tale of the events leading up to the war and the war itself are covered in over 400 pages of scholarly writing in a most engaging and fascinating account. The First Afghan War is not a subject that is widely covered, but this highly readable product of what has clearly been a significant level of research puts that right in an ‘all singing, all dancing’ way.

The causes of the war suggest that modern-day politicians and generals do not read history. The war began in response to a Russian-backed Persian invasion of Western Afghanistan, and when that fizzled out, instead of standing down the ill advised Governor General ordered the invasion of Afghanistan to go ahead anyway with the sole purpose of regime change. Sound familiar?

The author takes us through every stage of the campaign in great detail. Many readers will be aware of the retreat from Kabul, the last stand of HM 44th Foot and of Dr Bryden, one of many ‘sole’ survivors. But the war encompassed far more than the ill-fated retreat, and included a significant number of battles and assaults, many less well known, like the last stand of the 4th Ghurkas. The fascinating political moves, the planned response to the Persian invasion, the involvement of the Sikhs and plans for the installation of Shah Sujah as king and a puppet of the Honourable East India Company, all taking place before the actual invasion are examined closely and could merit a book in their own right.
Extracts from a an absolute mass of contemporary documents and personal and official correspondence are spread liberally throughout the book, and these as always add context and depth, as well as a human element to the narrative, whereby it is possible to better understand why actions were taken, or weren’t. In occasional examples, one might very well question the motives of some of those involved, or the original writers’ false impressions of the situation and gross underestimation of the opposition that the invaders would face, but then again, put in the context of the time, perhaps not.

The book is well illustrated with many colour and black and white plates of contemporary illustrations, some of which I’d not seen before. There are also plenty of useful maps to help the reader through the text. (I have to say one more word about the cover illustration by artist David Rowlands, insofar that prints of the original painting are available from the artist for a very reasonable price).

The book is well written, with an extensive bibliography, and  several particularly interesting appendices. This should be the ‘go to’ reference for anyone with an interest in the war. If you don’t own any others on the subject then get this one.
By Colin Ashton - November 30, 2021