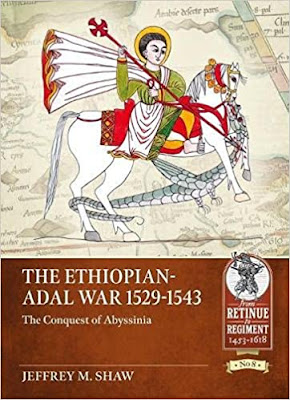 I had a vague idea that the Portuguese were involved militarily in Ethiopia in the sixteenth century, but beyond that it was all a complete mystery to me. Not quite so now, as this is a subject that the author clearly has a pretty comprehensive understanding of, and having read the book now I feel suitably enlightened. Books on the Ethiopian-Adal War of 1529-53 are not something one comes across very often (if ever before now)in English, so the fact that the author has presented such a readable and educational work based on largely Portuguese and Ethiopian sources is beyond amazing!

Adal was a Muslim Sultanate, it’s borders corresponding with the territory of modern-day Somalia. In 1529 they invaded Christian Ethiopia, and little by little the Ethiopians were driven back and on the verge of defeat, until the Portuguese (already with a presence in the Indian Ocean) stepped in to support their fellow Christians in the war against Islam and the Ottoman Empire with a small army that punched well above its weight in the battles to come.

In addition to an interesting account of the key players, the armies, campaigns and battles, we get a good bit of background into the region and it’s diverse peoples. It is clearly well researched and illustrated throughout with maps and contemporary illustrations.

For something a little different I can recommend this book highly, and I guess it has a fair bit of wargaming potential for those who like to collect figures and game the the more fringe conflicts.