Well here it is, the first battle in our fictional Late Roman campaign. On Saturday the army of Sillius Soddus, Comes of Asienus Superior, attacked the Visigoths under their king, Wodewic, who had been laying siege to the town of Corpiscanum. Nigel is Sillius Soddus, and Paul and Dave had his back. Neil as Wodewic had Conrad and John on his side of the table. Both generals were free to chose their armies from the appropriate Army lists for Sword and Spear. (I’m not a lover of army lists, and there a things I don’t agree with in this set, but some flexibility has been allowed for this campaign). The Goths were outnumbered by 20 percent which going to make it interesting- I like slightly asymmetrical games. In total there were about 1800 points across both armies.

As might be expected there are lots of photos. To make it easier to follow, and write, after a couple of introductory pictures I’ve split the narrative and accompanying photographs into (from the Roman pov) left wing, right wing and centre. More or less anyway.....

behind them Nigel's reserve, four Legio Palatina.
And now to events on the Roman left wing. Paul and John both advanced with their cavalry. It was a see-saw combat for most of the game but some unlucky dice rolls on Paul’s part resulted in all his cavalry, 2 units of cataphracts, three of heavy cavalry and one of light cavalry being destroyed or driven from the field and Paul’s commander was killed. The Goths took some heavy losses but by the end of the game were swinging round to attack the Roman centre from the flank. 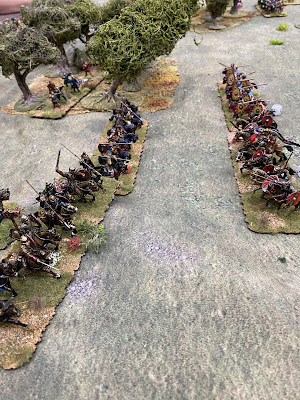 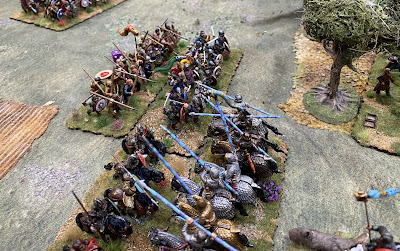 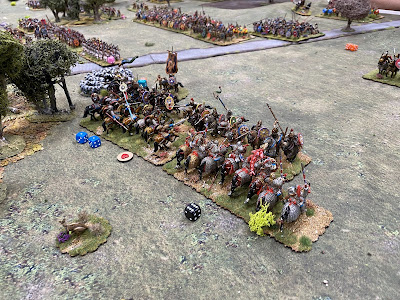 In the centre the Visigoths had a mass of infantry (iirc about six or seven large units of warriors) facing ten Roman legions of varying quality. When the troops made contact with each other it was pretty brutal. The Visigoth infantry is a one-shot weapon really, and if they take losses before a melee they loose their ‘impact’ status which could otherwise make short work of whoever was facing them; even Romans. That’s where the Roman throwing weapons evened up the odds, but it was only Roman legions that were forced to retreat or were broken, the entire first line being swept away. The Visigoths hung on throughout the game and despite the best efforts of Dave in charge of the Roman centre they held grimly on, effectively pinning the enemy centre while the Roman flanks were both turned. The Roman war machines caused some early losses but were soon unable to see anything to shoot at. A potential breakthrough by the Romans, led by their valiant commander Sillius Soddus was broken up and Sillius was killed. 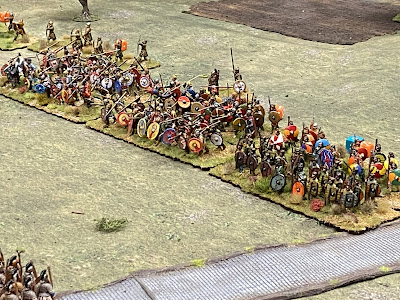 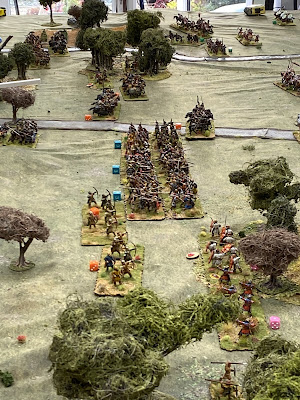 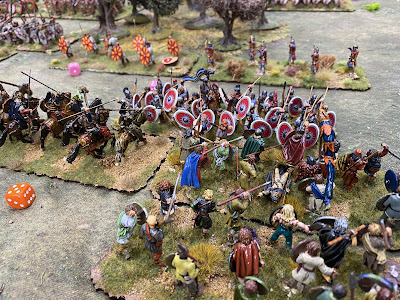 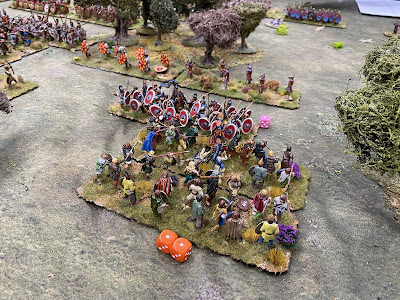 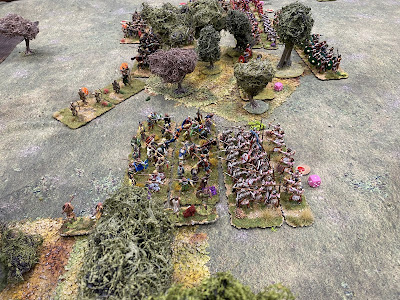 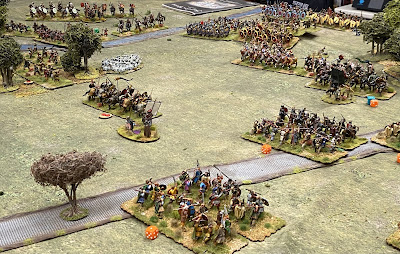 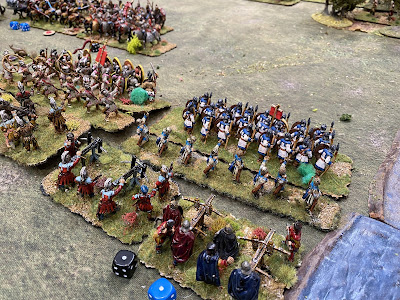 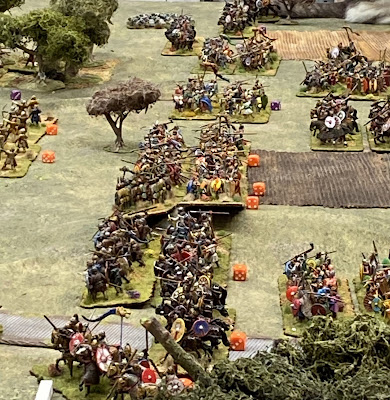 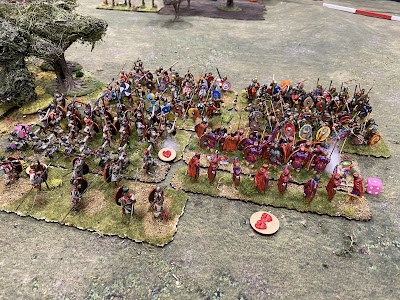 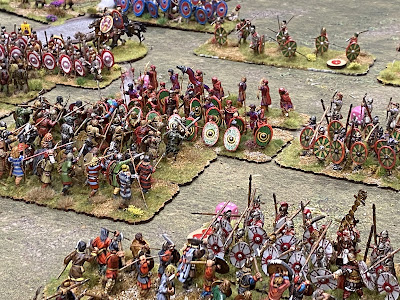 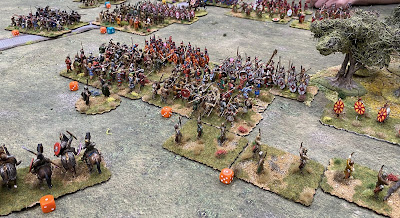 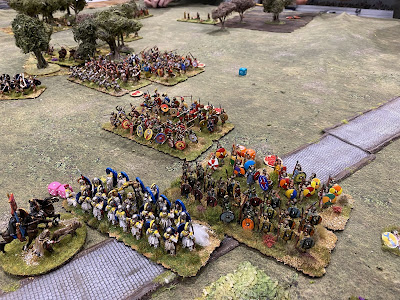 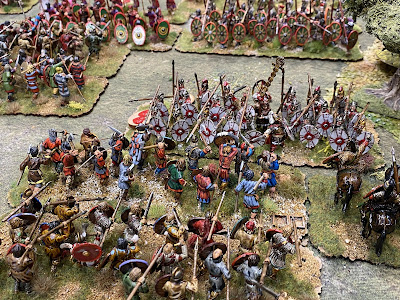 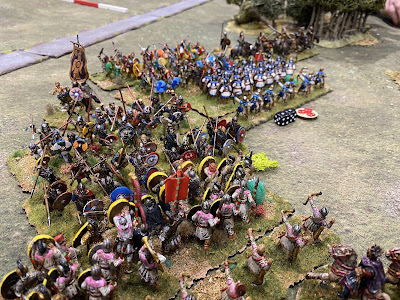 On the other flank the Visigoths were slow to move but made good progress when they did as they were initially only facing light cavalry and light infantry. Despite being harried mercilessly by Roman light cavalry the foot warriors and heavy cavalry managed to sweep round the flank of the Roman line, drawing off troops from the centre. 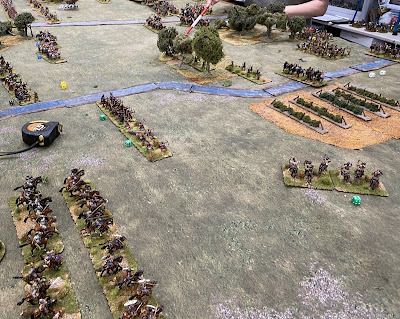 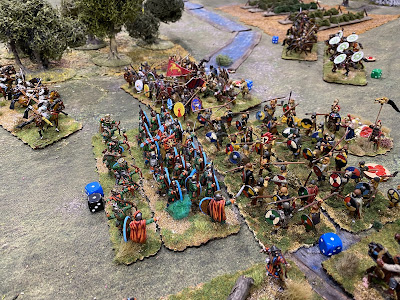 Well it was certainly not a game without excitement and a certain level of confusion. The Visigoths were outnumbered but thanks to some good fortune on their part and bad fortune on the part of the Romans they managed a quite convincing if almost Pyrrhic, victory.  As ever Sword and Spear proved well able to handle a large game such as this. There are two, if not three, battles to fight before this campaign turn can finish, the first of which will take place in a couple of weeks time. 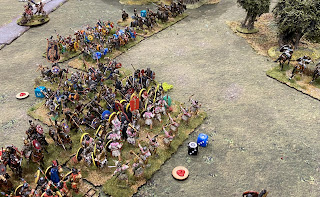 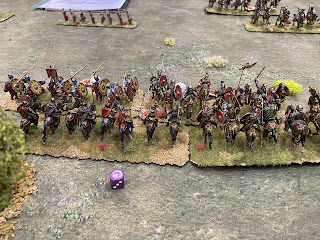 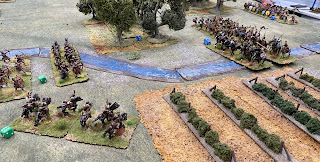 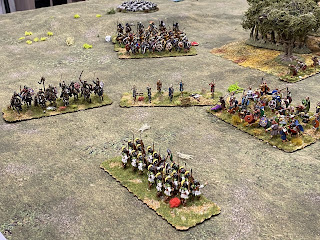 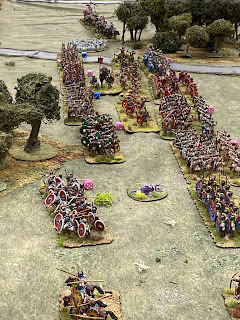 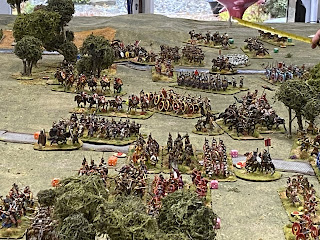