On Friday my mates Tim, Barry and Togs from the Like a Stone Wall group joined me and Conrad for a game. When I had originally told them I wasn’t going ahead with a demo game at Battleground they very kindly offered to come for a game on Friday, and they even offered to bring all the troops and much of the terrain with them as well. I set up as much of the table as I could, as Tim said he’d bring the buildings and other terrain items. The game was in 1/72 scale and pretty much most of the vehicles and all the buildings had been 3D printed by Togs, and damned good they were too, being a mixture of plastic or resin creations made from files readily available on t’internet for free of for very cheap. The buildings are particularly impressive.

Now, regular readers will see that anything beyond the 1930s is pretty much absent from this blog, certainly for many years; one has to stop somewhere I suppose. Anyway, Tim umpired while Togs and I were the Canadians and Barry and Conrad the German Falschirmjager. We used a set called Iron Cross, with a few house rules, and I have to say that they were very easy to pick up and the mechanics of the game really quite simple. I won’t begin to describe them, other than to say that with the exception of small arms, if you had line of sight you could shoot at anything from anywhere, which meant advances had to be carried out carefully to make the best use of terrain, or smoke,  or both. We were playing down the length of the table as well, which added further challenges, as we wouldn’t be able to hang back too much. Anyway, I was so engrossed in the game that I forgot to take very many photos, but here they are together with a couple from Tim. 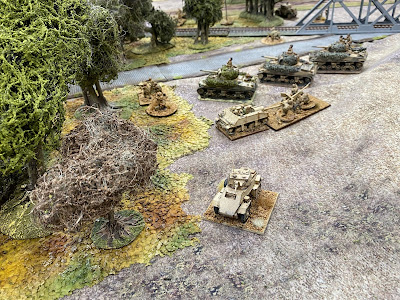 The left flank of the Canadian start point. A troop of Sherman’s with a 6-pdr and armoured car. 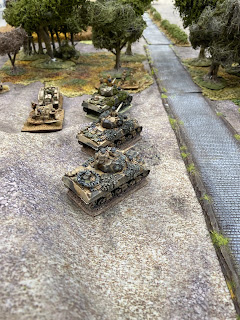 The road headed straight for the town that was our main objective. Not a journey the tankers would relish. 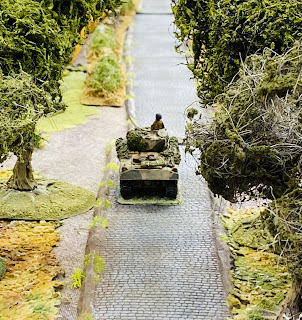 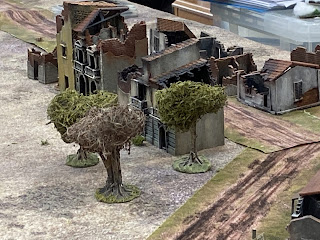 On the left the leading Canadian Sherman edges forward. On the right the sleepy village which was our first objective. 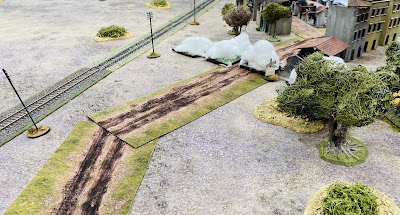 Before tackling the village on our flank smoke was called down to screen our advance. 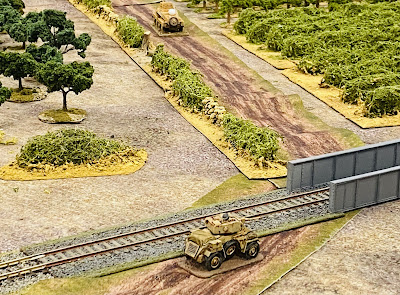 Our recce sped through the village, dodged several panzershrecks and stopped ready to spot stuff down the road into the town. 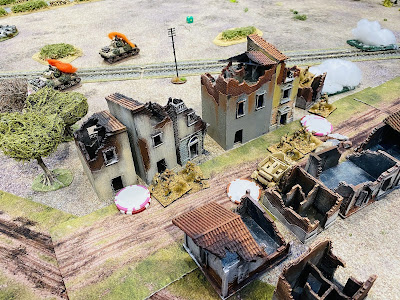 Our infantry took the town. An enemy platoon holding the buildings to their left had been silenced earlier. 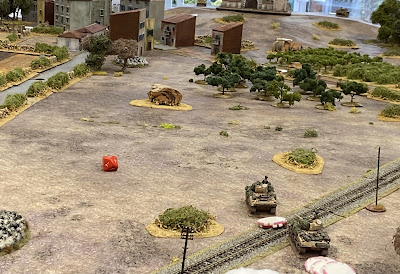 Shermans advance over the railway line. 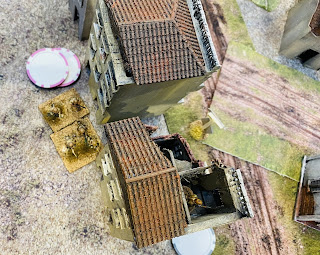 Falschirmjager anti tank team flushed out of this house. 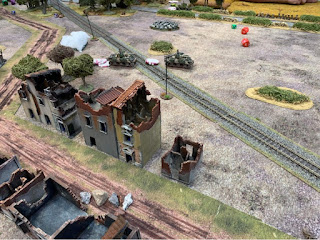 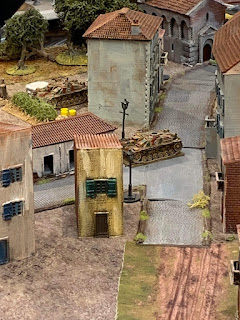 The town was held by German armour. Some of this was neutralised but not before they’d knocked out two Shermans on the road.
That was the final turn as the weather turned into a downpour with only 18” visibility and limited movement. It was agreed to end the game. Losses had been more or less equal but the Germans still held two of the three objectives. No doubt they’d use the bad weather to slip away safe from pursuit.
It was a thoroughly enjoyable game, played in a very gentlemanly way. Much thanks must go to Tim, Barry and Togs for so kindly offering to make the trip up with the game. I know Conrad enjoyed the game as well. Of course I’m now thinking about setting my own 3D printer away on some terrain items…… and perhaps other stuff as well.
By Colin Ashton - November 21, 2021