A battle loosely resembling the Battle of Novara, 16 June 1513. (Or, "There's something wrong with our bloody Swiss today!")

An excellent day’s wargaming was had on Saturday. First I hosted a technologically trouble free live streamed Italian Wars game, based, as the title suggests, loosely on the Battle of Novara in the early part of the Italian Wars.  The city and walls played no part in the game. I’d left it out as a work in progress and also because I’ve not solved yet the question of where to store it. This was quite a small game compared with my usual ones, but it did leave some space for manoeuvring if needed. These photos from the previous post show the table and the deployment of both sides. 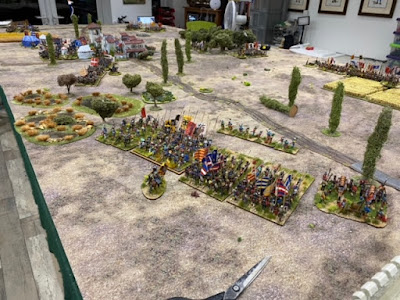 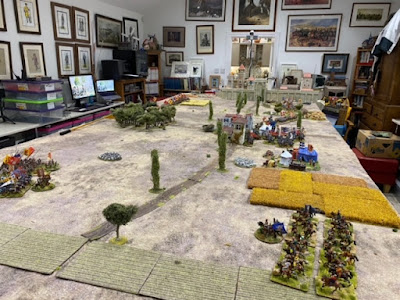 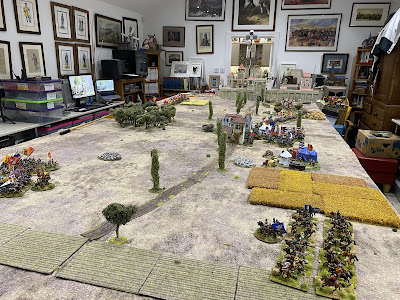 The French have been caught with their hose down by the Swiss, nominally under the command of Maximilian Sforza, the Duke of Milan as he was paying them.  The army had made a rapid early morning advance towards the French army, camped in and around a village. The Swiss were in three columns. From right to left, the first was made up of a block of 1000 pikemen and 200 ‘lances’ of Italian Gendarmes. The second contained a unit of crossbow-armed skirmishers and a block of 2000 pike. The third column on the left was 6000 strong, in two huge pike blocks and one unit of halbardiers and a couple of puny light guns. The French had approx 1000 assorted Stradiots and other light cavalry on their extreme left, four large units of gendarmes in and around the camp/village, 4000 Gascon crossbowmen in three units and on the right, facing the main Swiss column, 6000 Landsknechts in two huge pike blocks supported by some shot and two-handed swordsmen. There were also two medium guns. We used Pike and Shot, much fiddled with, and with more representative (ie a bit of thought, not all mine, went into them unlike the ones in the rules) unit stats. I class ‘huge’ units as ones with more than 64 figures, and step further up than ‘large’ units, giving them  extra melee dice and stamina. This was also the first time I fielded my gendarmes in units of 12 instead of six. They looked much better that way and I also gave them a little bit more in the way of stamina but not melee dice.

A smaller than normal turnout this time. Conrad, Richard and Shaun were the French while Neil and Mark (beamed in all the way from Adelaide) were the Swiss. The French thought they would have a tough fight on their hands to win. How right they were. 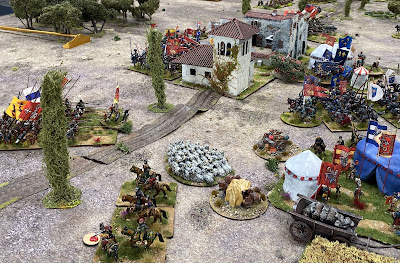 So, despite it not being as big a game as I'd normally offer on a Saturday it went rather well, with a complete and utter decisive victory for the French. The players had enough figures to play with and the French, despite thinking at the start that they were in for a good kicking, managed instead to give the Swiss the good news in a very dramatic victory. Thanks to everyone for taking part (and Mark especially for staying up way past cocoa time in Adelaide). The technology was faultless, the players managed to use it to good effect, switching between cameras, and the rules are Ok I suppose for games like this.  It was good to see that the Swiss are by no means invulnerable, but I'm not really sure the French light cavalry would really have been able to play Red Indians (sorry, Native Americans) with the Milanese. Oh well.

The afternoon was rounded off with another hour and a half of banter and sharing of all things Wargames related with the Virtual (and global) Wargames Group run by Phil Olley. After the usual excellent ‘show and tell’, another Tidders’ Time from Alan Titchmarsh, a presentation of his new cavernous games room by American member Chris Bump that left us in awe, I rattled through a presentation on my refight of the Battle of Ferozeshah in the First Sikh War.

Today’s bad bit of news came from Shaun. He told us that a former but previously long standing member of the Durham Club had passed away after a short fight with Covid. I’d first met Big Ron Emery back in 1975/76 when we were both in D Co. of the 5th Btn the Light Infantry, a TA unit with close links to the famous but by then disbanded/merged Durham Light Infantry. We’d only been in sporadic contact over the last couple of years but I was sad to hear of his passing. Ronnie was an inveterate terrain maker and DIY person, so I’m sure he’ll be knocking up some excellent terrain boards, shelving and gaming tables for the other Big Guy in no time at all.