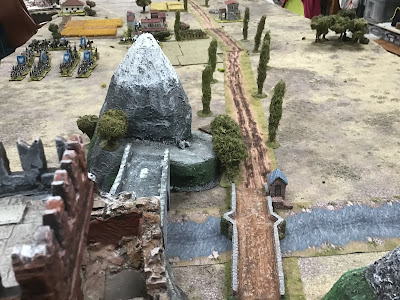 The Battle of Castello Melanzana

The 1st Ristorante War came about as a result of French and Austrian rivalry in Northern Italy during the second quarter of the 18th century. Following the War of the Waldensian Succession between 1669 and 1671 (see my blog) and the War of the Spanish Succession the Austrians began to re-exert their influence over Northern Italy, in particular the young and Protestant County of Waldensia which had wrestled a form of independence from Piedmont following the latter’s defeat at the hands of the French in 1671. The County occupies territory that controls several of the major mountain passes from France into Northern Italy holds a key strategic value to all the major powers. The Waldensians have actively courted support from the Austrians in their desire to remain independent in the face of a resurgent Piedmont and the French, who were now allied with the Piedmontese.  Spain, had long (since being on the winning side in the war of 1669-71) been covetous of the territory of Waldensia and was also keen to  extend their influence northwards from Naples.  The French were happy to have the Spanish at their side again, knowing that any territorial ambitions of the Spanish would be short lived due to widespread ineptitude, a lack of money and poor communications.

Initially it was the Spanish who began, covertly, to establish a wide network of spies based on a growing number of Tapas restaurants throughout the County.  Not to be outdone the French ran their intelligence network through several haute cuisine restaurants, patisseries and chocolatiers. The Austrians were caught on the back foot as Hapsberg cuisine was no match for the best the French and Spanish could throw at them. They  did attempt to launch a chain of Wurst und Schnitzel outlets (mit cafe und kuchen) but demand was low.  The Waldensians were not in favour of so many French and Spanish eateries popping up across their territory as they were driving the local gelato and Tagliatelli dealers out of business, and there was growing civil unrest, culminating in the now famous ‘Food Riots of Waldens’ in early 1732. This episode might have simply fizzled out were it not for the fact that the three great powers were already on the verge of hostilities as a result of the disputed Polish crown in what was to be known as the War of Polish Succession (and which was mostly played out in Northern Italy). The Lotti di Bun incidents soon turned from a food fight to all out war as Spanish, French and Austrian eateries were ransacked, looted or burnt down by each other’s supporters  or simply consumed by the populace,  and opposing armies manoeuvred around the borders of the strategically important Waldens valley. So began the conflict which history was to call the 1st Ristorante War.

The objectives are straightforward. The Franco-Spanish army needs to gain and hold the Waldens valley, the key to which is the Castello Melanzana. The area is held by a combined Austro-Waldensian army.  Therefore, Franco/Spanish objectives are to destroy the enemy force in order to gain control of the only viable pass through the mountains into the County of Walden proper. Without the destruction of the enemy field army invading through the pass is impossible. This is also the only avenue of retreat for the Austrians.