Italian Wars rematch, the second half, played behind closed doors

Yesterday (Friday) was supposed to see us finish this game. Sadly we were having trouble with live-streaming the event due to some internet problems so it had to be cancelled.

Undeterred I decided to play it to a conclusion solo as I had a very good idea of each side’s plans.

If you remember (if you can’t click here) the French were being hard pressed in the centre and on the left wing but the Swiss on their right were advancing (ok, slowly and very non-Swisslike), cowing the Papal troops facing them into staying on their side of the river with the exception of some skirmishers. We’d left the game at the end of the French movement phase with a couple of charges to work out. The Landsnecht swordsmen had charged the multi-barrelled cannon that’d been shooting at the Landsnecht pike block. The closing fire was ineffective and the guns were overrun. The French gendarmes on the left had charged two units of Spanish Genites. One successfully evaded but the other failed their fire and evade test so were hit by the gendarmes, but got off lightly insofar that they threw high on their break test so only retreated in disorder, and shaken. But I’m getting ahead of myself.

Here’s how the game played out. 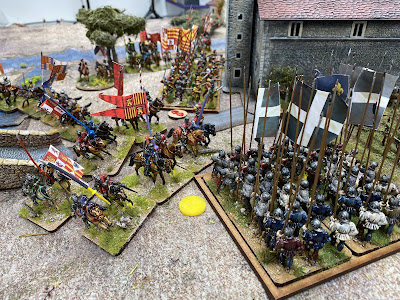 Back near the Abbey the Spanish gendarmes charged the shaken French pikes but miraculously failed to break them having missed all but three of their hits. The pikes survived the break test but were forced to retreat. The Spanish thought better of following up due to the proximity of more French gendarmes.

I’d only played the end of one French turn then one full turn for each side, and the situation had changed very quickly. The battle was by no means decided yet though so the fighting continued on Saturday afternoon. (I was supposed to be playing in Hail Caesar game hosted by Steve but had a bad night so had taken extra happy juice to get to sleep, so was in no fit state to play. Steve encountered the same problems that we had as it seems that YouTube have changed their streaming platform so it has become impossible, so far as we can ascertain, to livestream with multiple cameras. Why did they do that?).
This afternoon I finished the game off. 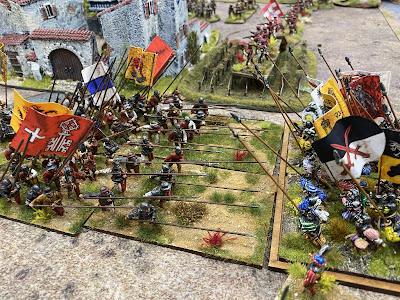 At this point I decided to call it a day and a significant French victory. The League wings were both caving in and the centre was beginning to crumble under the pressure from the French gendarmes. It was a victory of quality over quantity but only just. Maybe I should have given the League some more troops? Nah! At least there was room to manoeuvre (when the right dice were thrown!). The rules (Pike and Shotte, with sensible amendments) worked fine for a relatively large game. I think I shall definitely consolidate my six figure gendarme units into  12 figure ones. The Spanish colonela worked well as a multi-armed unit except when disordered and faced by gendarmes. Everything else worked well and I was happy with the way the game played out.
I am hoping to run another game next Saturday subject to the broadband issues being resolved and being able to create a fix for the Youtube stuff.
By Colin Ashton - October 03, 2020