Pakistani Airforce in the 1971 Indo-Pakistan War from Helion 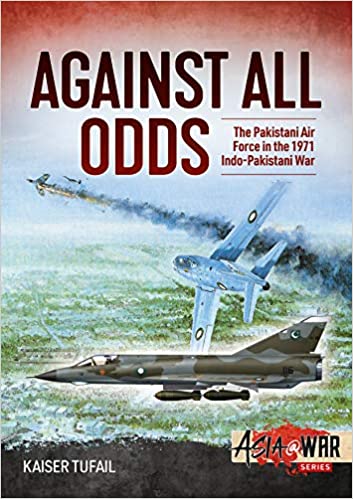 For anyone wanting an introduction to the 1971 India-Pakistan War this is a great place to start. The book outlines the course of the war in sufficient detail for me, and the inclusion of often detailed narrative relating to specific dogfights or sorties adds a nice human touch. I have to say that this is nowadays only a fringe area of interest for me, but I found this book to be well written and an engaging read to the extent that it has rekindled my interest in the subject. It is crammed full of fantastic photographs of men and their machines taken largely during the war. There are also seven pages of original colour illustrations of the main aircraft that were deployed by both sides during the war. The eighth colour page is a great map showing the theatre of operations which I found really useful. There are other equally handy black and white maps dotted through the the book. The references and bibliography are as one might expect, extensive and include the personal recollections of many of the men who went to war in 1971.

In terms of content, as well as the narrative covering the war, there is information on the Pakistan Airforce’s combat strength as well as that of the Indian Air Force, and their bases at the start of the war. There are tables detailing a variety of useful facts, such as a list of each Pakistan and Indian aircraft lost during the war, the fate of the pilots, and how the aircraft were lost. I also found it fascinating to learn about the diverse range of aircraft operated by both sides during the war, many of which (e.g. Hunters, Canberra’s, Mirages and F86 Sabres) will have hung from my ceiling in kit form at the time of the conflict . Overall I’d say this is a great book for anyone interested in ‘modern’ (almost 50 years ago) air combat. Who doesn’t like jets and didn’t ever want to be a fighter pilot?
By Colin Ashton - October 19, 2020