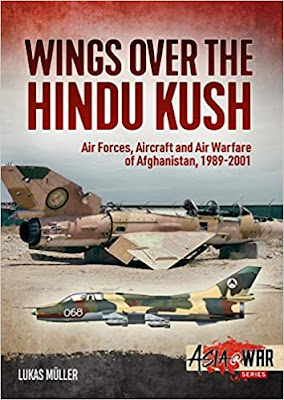 The nice people at Helion kindly sent me a copy of this book to review. Their ‘Asia at War’ series is turning into a repository of an increasing number of really good books on some niche and rarely written about subjects. ‘Wings over the Hindu Kush’ by Lucas Muller is a case in point as the book focuses entirely on the Afghan Airforce in all its various incarnations from under the Communist government’s fight against the Mujahideen, through to the ascendancy and then fall of the Taliban regime during the period 1989 - 2001.  This makes a great change to reading about Soviet and NATO airforces deployed to Afghanistan.

After the introduction and a comprehensive scene setting, we are given an account of the aerial conflict in Afghanistan from the point of view of the various factions, broken down into the Najibullah Government v the Mujihadeen 1989-92, the vicious civil war between 1992-96, the conquest of the north by the Taliban 1996-98 and the further gains then sudden fall of the Taliban between 1999 and 2001. Included in the appendices are unit strengths, equipment and losses. The book is laced with lots of black and white photographs and some handy maps which help put points raised in the narrative in perspective. As expected, there are sixteen pages of colour illustrations, mostly of the various aircraft operated by government and Taliban forces (it never occurred to me that the Taliban operated an airforce, even a small and ill-equipped one). There’s also a few colour illustrations of surface to air missile systems and a large colour map of the area of operations.

So, great photographs and colour plates, a compact, comprehensive and from my perspective highly informative (It isn’t a subject I knew a great deal about and the necessarily brief chapter on the geo-political issues was especially enlightening) account of the air war over Afghanistan during those troubles years. Yet another great book from Helion to add to their catalogue.