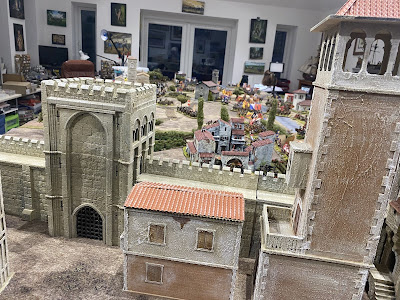 I hate making mdf buildings. I hate painting buildings. I loathe making almost any kind of terrain. I can do it, usually to an ok standard, often badly, occasionally very well.  I will leave you to be the judge.

Anyway, I had been planning to run a large Italian Wars game at the now cancelled 2020 Battleground show in Stockton. Pre pandemic I’d started buying suitable buildings to make a city which I though would make a nice end piece for the table. I soon ended up with more houses and stuff than I could shake the proverbial bricklayer’s hod at,  but never mind. Most of the buildings are off a firm called Tabletop Combat (TTC) who do a great ‘Streets of Venice’ range of buildings in 28mm in mdf. Not only is there an extremely wide range of buildings to chose from, but they are relatively easy to put together even for ten-thumbed humans like me, and are much cheaper than other suppliers. I do have a couple of Sarissa, Warbases and Charlie Foxtrot houses as well, together with some plinths and fountains and such like to populate the streets. The Wall and the tall tower are Renendra and the lone shorter tower is an old Ian Weekly model. I replaced all the card roofs with  plastic terracotta tile sheets which look quite effective, from a distance at least. 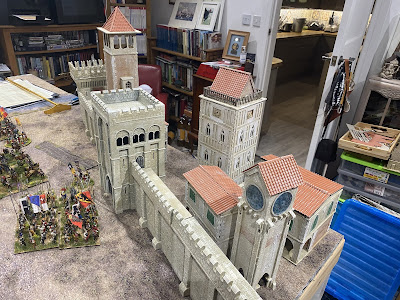 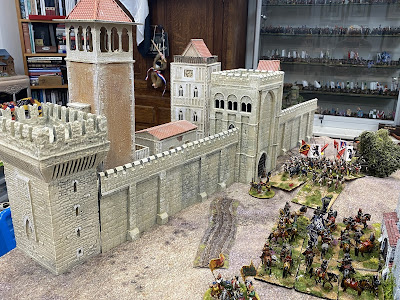 As stated earlier I have some more pieces to complete, including some more Renendra walls and towers to make a total of six feet to go down one of the short edges of my table. I also have five or six more TTC buildings, mainly small ones apart from another tower, to start. I built all the buildings shown here in the two weeks of nice weather we had last month, overdosing on PVA and polystyrene cement in the garden. I reckon the leftovers will have to be done indoors judging by the grey gloop outside as I write this. One other thing I could do with is a suitably Mediterranean backdrop to place behind the city.
I don’t have a game this weekend ( I did but events have overtaken me) as I now have back-to-back hospital appointments today and tomorrow for different bits of my once perfectly tuned and now seriously out of kilter body. I do however plan to take part in this weeks VWG on Saturday teatime and I will be hosting a big game in the Burrow on Saturday 17 October, probably Italian Wars so I can play the period to death before moving on to something else, and maybe even something new......? Of course with a week to go I should get another three of four units done by then, should I wish to.
By Colin Ashton - October 07, 2020