Something different, very different in fact 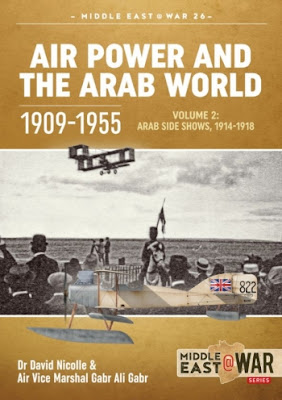 This is the another volume from Helion covering Air Power and the Arab World 1909-1955, this time focussing on the operations of not only the British (RFC/RNAS/RAF) but the French, Italians and Spanish air services. Subtitled ‘Arab Side Shows, 1914-1918, book is largely devoted to allied operations during the First World War. However, the final chapter looks at the aerial campaign in Spanish Morocco which ran concurrently with The Great War.

For its size, this book crams in an interesting and enlightening amount of information. Clearly the vast majority of this covers the British (and Anglo-Egyptian ) areas of operations in Egypt, Arabia, Palestine and Iraq, but the chapters on the French, Italian and Spanish, though smaller, still include a mass of useful information. As well as pure air operations we are also treated to accounts of combined operations, and the use of dirigibles and seaplanes.

The book is worth it for the photographs and colour illustrations alone. It is crammed full of superb contemporary photographs of operations, aircraft, personnel and notable individuals. The colour illustrations span eight pages, showing some 20 different aircraft and a superb colour map of the Middle East showing the locations of Ottoman, German, British and French aerodromes throughout the War.

This is a well written and easy-to-read work, based on a significant volume of research, using English language and Arabic sources in addition to other various European sources. It’s great value for money for anyone with even only a modicum of interest in the subject. It’s not a book I would normally have picked up but I have to say having read it , I am hooked on the subject and I recommend it highly. Well done again Helion for providing an insight into yet another rather niche military subject and bringing it to us in such a readable form. I shall now have to get my hands on the corresponding volume covering the operations of the Ottoman and Central Powers over the same period.