After the Battle of Poulligeun the French army under General  Cancleux withdrew to lick its wounds while still blocking any British attempt to make another attempt on Le Croisic The British and French Emigre troops consolidated their positions at Poulliguen to cover the main depot at Pornichet and it’s harbour. They also buried Major General Sir George Ashton on the field of battle, mortally wounded as he led a single squadron of vastly outnumbered Emigre dragoons against a formidable number of enemy infantry (an entire division!), contributing to the final victory at the cost of his own life. Poems and songs will be written in his honour.....well  pub in his name maybe? 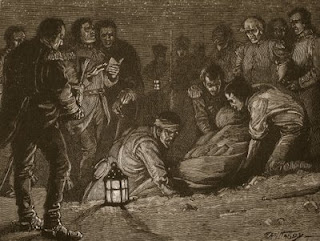 So far, neither side can be said to have covered themselves with glory. After the initial success of the landing we find the English recovering from a defeat at Le Croisic and a bloody victory at Pouilliguen. The French have been full of revolutionary fervour but with the exception of their victory at Le Croisic lacking in finesse.
The main Allied force is still entrenched sitting idly outside the town of St Nazaire. The Allied commander the Comte d'Hervilly delayed an assault on the town immediately on their arrival thus allowing the Republican defenders time to prepare themselves for the attack or to pre empt the Allied attack with one of their own. The English commander General Cyrus Trapaud, 80 years of age, was taken ill and retired to his billet in Pornichet, leaving only relatively junior, but more experienced, English commanders champing at the bit to do something, frustrated by the Comte's lethargy.

French Republican troops have been marching towards St Nazaire to reinforce the garrison there and to threaten the left flank and rear of the Anglo-Emigre army.  Reinforcements from Nantes are also close by and the Allies, despite being reinforced by two of Moore's battalions (79th and 92nd), from Pouilliguen,  are in danger of being cut off and overwhelmed.
By Colin Ashton - April 09, 2018