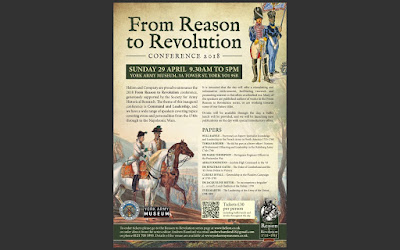 Yesterday John the Red and I headed off early on the short trip down to York for this conference, organised by Helion Books, held in the York Army Museum. The museum is ‘home’ to The Royal Dragoon Guards and The Yorkshire Regiment and all their antecedent regiments, of which there are many after over half a century of mergers and disbandments. The museum itself covers the period from the Restoration through to the present day with a well-presented and comprehensive collection of weapons, uniforms, flags, regimental silver and of course medals. While I never tire of looking at “Captain Gillibrand’s” shako or “Corporal Baldrics’s” tunic and similar stuff, I always gravitate towards the medal collections, which for me all have their own story and offer up a very human side of conflict. The conference was sponsored jointly by the Museum and the Society for Army Historical Research.

The theme of the conference was Command and Leadership in the period broadly covering the XVIIIth century. The first session covered subjects such as the impact of the tensions experienced between French Colonial officers (coming under the Ministry of Marine) and those of the regular army (under the Ministry of War) during the Seven Years War in Canada, illustrated by the French attack on the British outpost at Fort Oswego on Lake Ontario. Ultimately these tensions were to cost France dear as they contributed to the loss of Canada. Next was a summary of the Austrian officer class during the Seven Years War. Finally, there was a presentation on the impact of the usually (in British histories) invisible Portuguese Engineer corps in the Peninsular War which I found particularly interesting given our family ties with Portugal and the Portuguese army.

There then followed a couple of book launches, one on the life of Sir George Murray, Wellington’s QMG, the other on 'The Scurrilous recollections' of John Harley (QM and Paymaster of his regiment the 47th Foot) during The Napoleonic Wars, which in true Daily Mail/Sun/Daily Star pulled no punches about the activities of fellow officers. I shall buy that one when it is available.

After a very nice lunch and a guided tour of the museum for those who wanted it we had more talks. The first 'panel' consisted of presentations on the command structure of the Jacobite army in 1745/46 and its impact on the uprising, and on the approach taken by the Duke of Cumberland in building up the morale of the British Army after the defeats at Prestonpans and Falkirk. Finally, we had a talk on Generalship in the Flanders Campaign 1793-95 (not that there was much to be seen on the Allied side, and that of the French was driven by a desire to avoid failure and an appointment with Mdm. La Guillotine). The speaker Carole Divall has just written a book on the life of Sir Ralph Abercrombie which is on my to buy list. This was followed by a session covering the much maligned Lord Chatham, who took a pretty undistinguished part in the 1799 Helder Campaign and is better remembered for leading the fiasco that was the 1809 Walcheren Expedition. I unwittingly unnerved the speaker before her session by jokingly suggesting that maps of the Header and North Holland looked like Scooby Doo! And they do too! Her first slide was of Scooby Doo! (No, North Holland). The last session of the day was by the French author Yves Martin, entitled 'The Maverick, the Hero and the Bureaucrat' (Bonapart, Kleber and Menou and their very different approaches to commanding the French campaign in Egypt between 1798 and 1801.

All of the talks were interesting, some very interesting and by and large the presenters did at worst an ok job, but mostly they were good at getting their subjects over. It was certainly a good day out and well worth a mere £30, which included lunch (the organisers over catered significantly). All the presentation papers and materiel will be made available by Helion shortly. The only negatives were the guy behind us who kept falling asleep and snoring, the uncomfortable seats and maybe the availability of drinking water and a healthy option at lunchtime.  I would certainly go again and will  be attending Helion's Century of the Soldier conference on 22 September at the Royal Armouries Leeds.

It was also good to have a chat with Philip Ball, author of 'A waste of Blood and Treasure' (an account of the 1799 Helder campaign) and Charles Singleton who it transpired went to the same school as me many hundreds of years ago - King Edward VII in Lytham. Small world.
Posted by Colin Ashton at 10:57 am